As those of you who know me are aware, I tend to be overly critical of film adaptations of comic books, especially those that I was exposed to at an early age. I felt, for example, a deep connection with this moment between Jean Grey and Scott Summers, and never felt the recent films properly addressed the underlying emotional content in moments such as these. 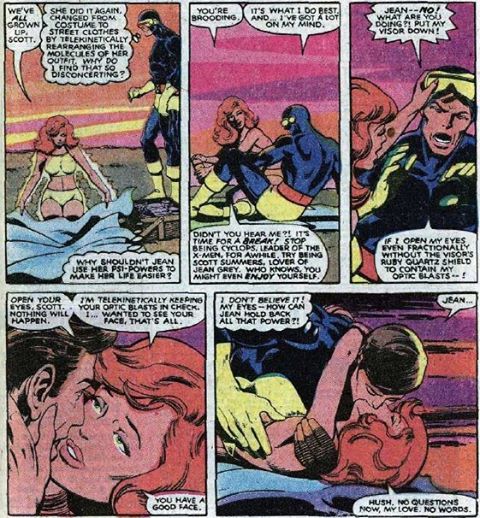 I'm fully aware that I don't give the X-Men movies a fair shake.

There's a phenomenon that happens in music, where the brain "compensates" and adds missing elements when experiencing the music through a different medium, such as in a concert.

Many bands use overdubs, or additional musical material, to "spice up" or add harmonic or melodic content to a recording. An example would be adding an additional guitar track for the third and final chorus of a song, just as a means to add a bit of excitement.

As a listener, if you fall in love with the song in question, and end up seeing the band live, where that additional guitar part isn't played, it's common for the memory of that guitar part to internally "auto-play" and compensate for its absence.

Another example would be a listener at a concert internally "forgiving" poor singing or a screw up by, again, compensating by using the "memory" recording of the song in question.

How are these things related? Well last night, I noticed that another comic book of my childhood, XIII, was available on Netflix streaming. While this TV adaptation has its moments, and a couple of the actors do a superb job, the show isn't what it could be.

And yet rather than having my knee-jerk reaction (as with the Jean / Scott scene) I found myself instinctively superimposing the moments and characters as I experienced them in childhood while reading the comic, much in the same way as a listener, I might have superimposed the missing overdubs at a live performance.

Have you had similar experiences?